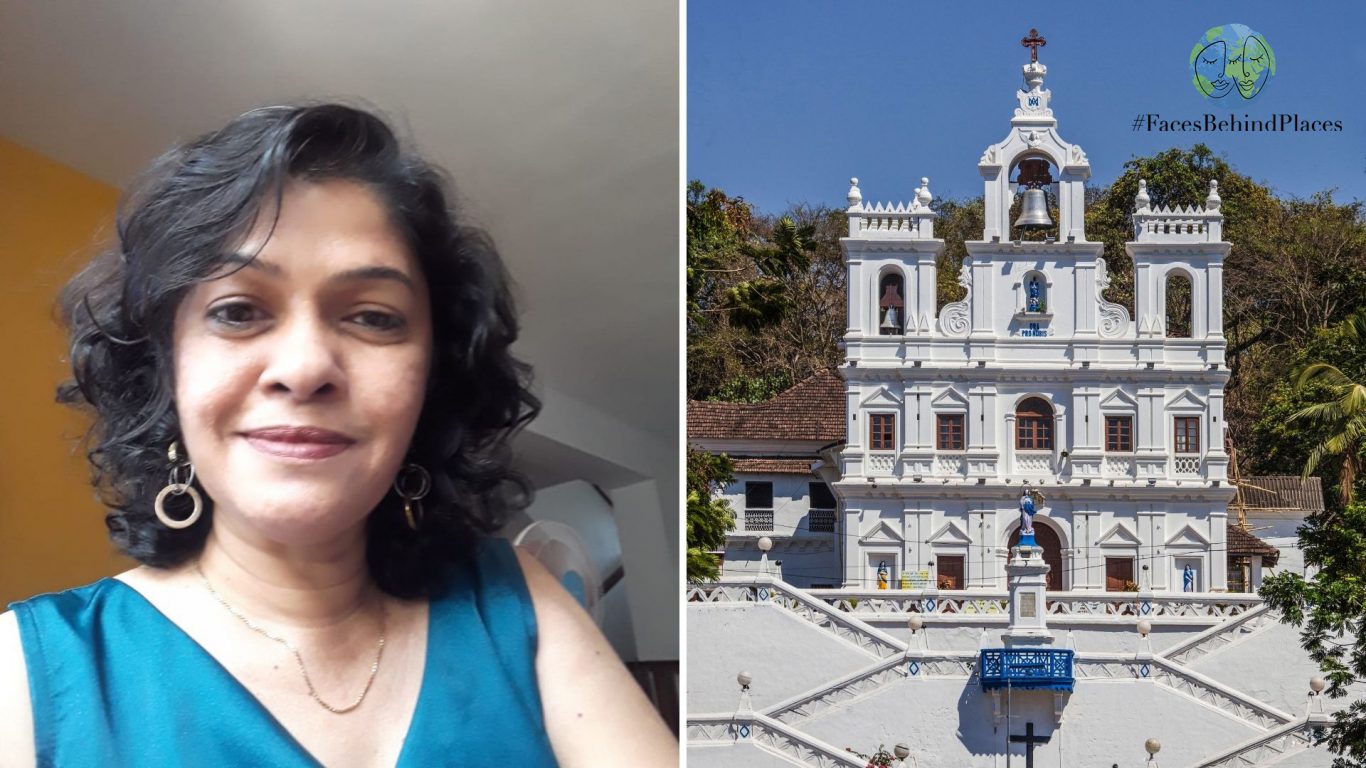 Deborah Dias comes from a Goa very different from the one most of us know today. “I have seen Goa when it was nothing,” she says. “In the 70’s, Goa was a proper village and it was beautiful. It was lush green and there were no buildings in sight. You could sleep peacefully at night with your doors wide open.” The fifty-two year old tour guide is currently staying strictly indoors at her home in Porvorim with her parents as the state grapples with a severe COVID-19 crisis. “I really don’t know whether there is going to be an end to this,” she says about the pandemic. “There is no work for me at all. In the last year, I must have done just five trips.”

“What does a tour guide do?”
When she started out in 1994, Deborah  was fresh out of college with a Home Science degree. At first, she worked as a hotel receptionist but soon grew tired of the low pay and routine. One day, after she had left her job, a cousin called to tell her about a government-organised Tour Guides course. “I remember asking my cousin, ‘What do you mean guide? What do they do?’ I was so naive, I had no idea”. Once she received her license and began doing small tours around Goa in 1994, there was no stopping her.

In the past 27 years, she has worked with clients from across Europe, USA and Scandinavia, taking them on walking tours through Panjim’s Latin Quarters in Fontainhas and on drives through small, lesser known villages in the state. As a young female guide in Goa, there was always the occasional odd client who made her uncomfortable. “Sometimes you do get a call from clients you don’t want to interact with—men who say they want a lady guide to show them around.” Over time, she’s learned to recognize and avoid such tourists and has given her time instead to couples and groups she feels comfortable with.

“I always tell tourists about the villages of Goa. The ones with the most narrow roads are the best to drive through on a bike,” she says. “There are so many beautiful things to see there. You might see someone going fishing or come across churches in the middle of nowhere with the most stunning views.” She encourages tourists to look beyond popular beaches and discover Goa through its distilleries producing feni—the state’s very own spirit made with cashew and toddy—or through the home-cooked meals served at spice plantations. She also recommends a walking tour on Divar island on the Mandovi river for its quiet old-world charm and tours to historic ancestral homes in Goa.

Goa is changing
Over the past few years, she has seen a dip in the number of tourists which she attributes to the way the state has changed. “I think that maybe people don’t want to see the newer modernized Goa anymore.” And the pandemic has only made things worse. “I used to walk all the time on my tours,” she says. “Now, I’m sitting at home and only stepping out to go to the shops.” She remembers fondly when cruise ships would bring in huge numbers of tourists to the state. “All the guides would always be happy when a cruise liner arrived because we would all get to meet each-other and have fun. When guides are together there is no stopping them,” she tells me. “We can just go on and on. Sometimes, we don’t even listen to each-other, we just want to talk.”

For now, the future seems too uncertain to Dias. With elderly parents at home, she feels the need to be extremely careful so as not to put them at risk. She plans to put her Home Science degree and cooking skills to use and start a small business selling home cooked meals to people in her town until things ease up. But the stress of rising cases and losing her regular job is on her mind constantly. Even still, Dias firmly believes this is where she belongs. “Many people ask me why I don’t just move to England. So many Goans have moved there,” she says. “But I’m very happy here. I love my land. It’s so beautiful and so special, I just want to talk about it and show it off to people.”