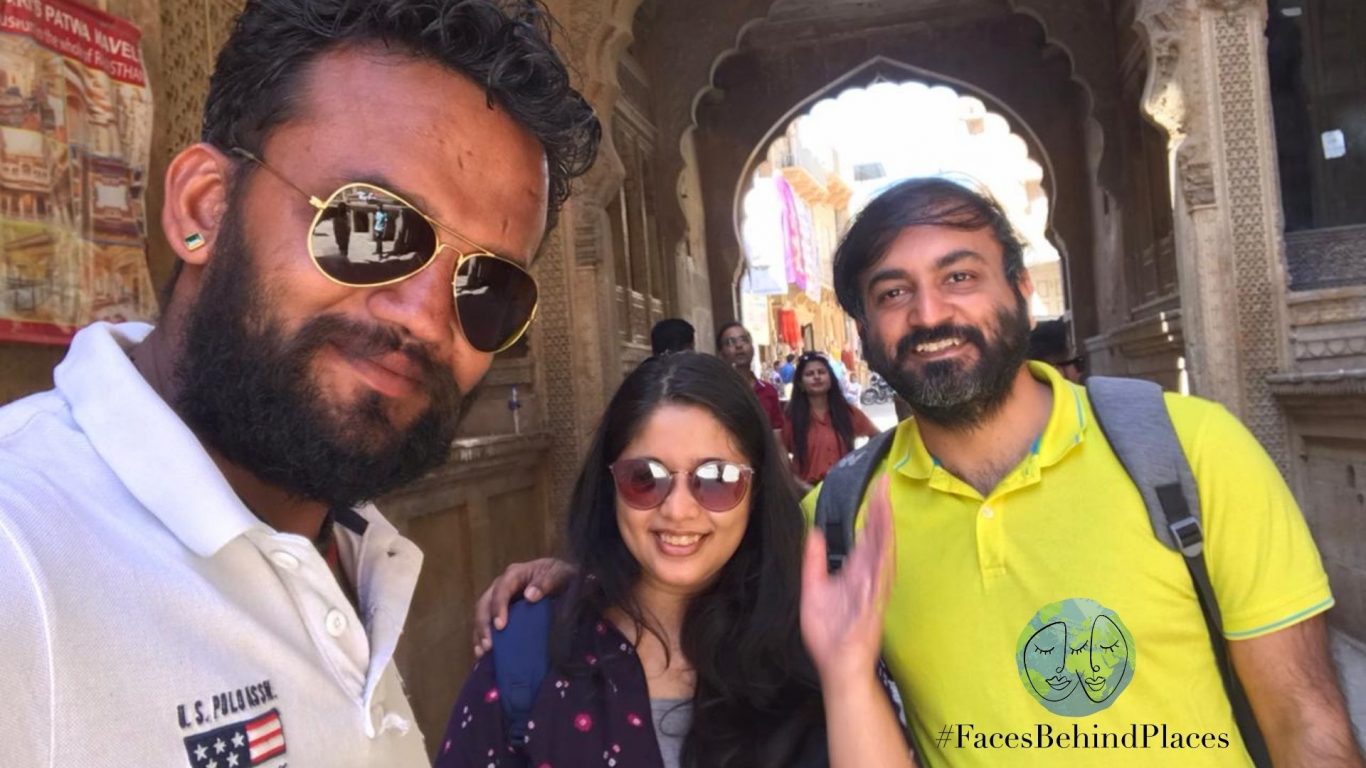 Suprita and her husband Punit with Chandu in Jaisalmer

“If you video call me, I can show you how empty the lanes of the Patwon Ki Haveli are. It’s very different from when you came here six months ago,” 25-year-old local guide Chandraveer Singh Bhatti tells me over the phone. Apart from regaling tourists with tales from Jaisalmer’s history, Chandu, as he is fondly called, is particularly adept at taking flattering photos of tourists for their social media feeds. If you are looking for him, you’ll find him hanging out near the Patwon Ki Haveli, a Jaisalmer landmark and former home of a wealthy brocade merchant.

Chandu has been a guide to the area for the last seven years.  According to him, the city has never been this empty. “Jaisalmer is a tourist town. Most locals rely on tourism for their income.  The last year has been rough and there have hardly been any travellers because of the pandemic. We are hoping things change by this winter.”

Chandu studied till the 12th grade and was inspired by his chacha (uncle) who was a tourist guide, to join the trade. “My chacha Laxman Singh was a licensed tour guide who spoke British English. He was one of the few  reputed tour guides of the time. He was a guide to many dignitaries. I followed him on his work assignments. I didn’t even speak Hindi properly at the time, but he gave me the courage to start off on my own.” Chandu learned the history of the city from the books his uncle had and also picked up stories and folklore from older members of his family. He laughs about how he absorbed all the knowledge he could over the years and made what he calls “a mixed veg” out of it.

He has other talents too. Chandu speaks Hindi now but also claims that he can hear an accent and identify which part of India a tourist belongs to. “We get a large number of tourists from Gujarat and Maharashtra and also from Bengal during the Durga Puja holidays. Maharashtrians often use words like changla, ikde and chala. I understand those and surprise them by speaking one or two  words in their language.”

“Most tourists who come here want to see the Jaisalmer Fort. Immortalised by Satyajit Ray’s Shonar Kella (Golden Fort) it is one of the few living forts in the world. One fourth of the old city’s population still resides within the fort. The Gadisar lake, the Tanot Mata temple and the War Museum are also places I recommend.”

If you’re visiting these locations in Jaisalmer, Chandu’s handy photography skills will come to your rescue—my partner and I experienced this first hand. Chandu possesses the rare ability to take photographs of you in flattering angles, with the monument featuring perfectly as a backdrop. He can even make it look as if you are the only people there, by magically avoiding all the other tourists who are walking around. “I learnt to take these photos by following people who came here for pre-wedding photoshoots. I would observe the angles that the photographers were using and sometimes ask questions too. I would then try these out on my own.” He’s found this skill very useful in the last couple of years, when he observed that many tourists were keener to be photographed “for Instagram” than learn about the history of the monument.

Chandu doesn’t have an official licence and works mostly with domestic tourists. “We always tell the tourists that we are unauthorized. I always say that they can pay only if they like my services. There is no compulsion,” he explains. He loves his ‘Rangeela’ Rajasthan and enjoys showing it off to visitors. Some of the more famous visitors he’s shown around are Gauri Khan and two of her friends [socialite Maheep Kapoor and designer Sandeep Khosla], whom he ended up driving around in Jaisalmer in an auto.

Chandu loves being a guide, but at the moment, he is prepping to be a cop. “My parents always wanted me to take up a government job. I’m physically fit and am studying for the exam. While he hopes this will bring his life some stability, the guide who sports aviators and rides a motorbike confesses that he truly enjoys meeting people from across cultures. “I love the exchange of experiences. I want to learn to speak Italian or French. I kept thinking I’ll learn it after I get a license. Soon, hopefully.”